An Aid in Dying Update: More Available, Yet Few Will Choose It 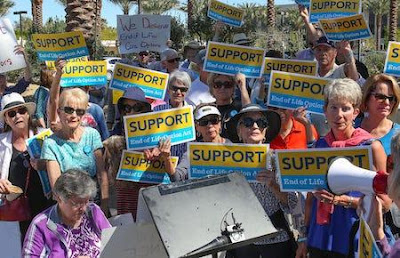 On August 1, New Jersey became the eighth state to allow doctors to prescribe lethal medication to terminally ill patients who want to end their lives. On Sept. 15, Maine will become the ninth. By October 2019, 22% of Americans will live in states where residents with six months or fewer to live can determine how and when they will die. (Oregon, Washington, Vermont, Montana, California, Colorado, Hawaii, District of Columbia) Oregon was the first state to pass the Death with Dignity Act in 1997. More than 20 years later, opposition groups remain wary of potential abuse. Hospitals with religious affiliations may refuse to allow their physicians to perform the procedure. Yet opposition is softening as support grows. Aid in dying is more available, yet few will choose it.

A look back on the EOLOA in California

California passed the End of Life Option Act (EOLOA) in 2015. Jerry Brown signed it into law in 2016. Four years and it remains controversial and problematic. While the campaign for aid in dying (or death with dignity) continues to make gains across the country, supporters are increasingly concerned about what happens after these laws are passed—on both sides of the issue.
The New Jersey bill had neared passage several times, but derailed in 2014 when Governor Chris Christie threatened a veto. Legislators passed the Aid in Dying for the Terminally Ill Act in 2019 and the governor signed it in April. Governor Janet Mills: “I do believe it is a right that should be protected by law–the right to make ultimate decisions.”

So what’s changed? All states are required to track usage and publish stats

Data show that whether a state has six months or 20 years of experience (Oregon, the pioneer in aid in dying), the proportion of deaths involving aid in dying (also known as physician-assisted suicide) remains tiny.
California’s 2017 data show that 632 people made the necessary two verbal requests to physicians, after which 241 doctors wrote prescriptions for 577 patients. This out of 269,000 deaths that year. The law shows no evidence of widespread abuse or misuse of the law. Attitudes within the medical community are changing. A number of national organizations and a dozen state medical societies have gone from opposing the law to taking neutral stances.

Despite Catholic organizations and other opponents, polls show broad support

In March, an aid-in-dying bill passed the Maryland House of Delegates but failed after a tie vote in the Senate. Opponents are attempting a ballot initiative to repeal Maine’s new law and pursuing a slow-moving court case to invalidate California’s. Yet public opinion polls consistently show broad support for aid in dying.

There’s enough data from a number of states now to identify trending. The low numbers of users show that most users would not choose this option. However, it may also reflect difficulty in actually using these laws.
A recent survey of 270 California hospitals, published in JAMA Internal Medicine, found that 18 months after implementation of the state’s EOLOA, more than 60% — many of them religiously affiliated — forbade affiliated physicians to participate. Compassion & Choices is intensifying efforts to persuade local health care systems, doctors and hospices to agree to consider patients’ requests.

Laws drawing scrutiny; many believe they’re too difficult with too many safeguards

The model has been the first-in-the-nation Oregon law, which took effect in 1997. The law requires that a terminally ill patient:
For a terminally ill patient who perhaps lives in a rural area where doctors are scarce or even in an urban area where they’re booked up for weeks in advance, this can become challenging. A Kaiser Permanente study shows that at least a third of those who inquire about the aid in dying measure become too ill to complete the process or die before they qualify. Hawaii’s law took effect in January. It requires a 20-day wait, and they’ve an additional mental-health consultation requirement.

The support for aid in dying continues to gain momentum. The fact that very few people are actually using this measure may be tamping down the fears of those historically opposed to the measure.

The result is numerous conversations on a wide range of topics related to health, healthcare and end-of-life planning. California Document Preparers assists our clients in the preparation of their Trusts, which include a Power of Attorney and Advance Healthcare Directive. Most are surprised at how easy it is. Schedule an appointment today by contacting us at one of our three Bay Area offices. Our dedicated team is helpful, compassionate and affordable.
Posted by Guideway at 2:57 AM