The Gig Economy: The Winners and the Losers 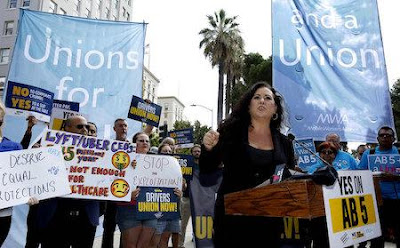 California has passed legislation that could help hundreds of thousands of independent contractors become employees. It would provide the opportunity to earn a minimum wage, overtime pay and other benefits. Yet this legislation is highly controversial. Uber, for one, doesn’t think the law’s provisions apply to its drivers. They’re just one company that is contesting this law.

The emergence of contractors, or “alternative” workers

The recession of 2009 was a catalyst, producing hundreds of thousands of contractors. These are workers who were laid off during the recession and started their own consulting firms or other small businesses, not necessarily out of choice but necessity.

Many of these contractors are older workers, those in their 40s, 50s and 60s

As the economy began to improve, employers were reluctant to hire these workers back at a higher rate when they could employ younger staff at a lower cost. They might hire those older workers as temporary contractors, but they wouldn’t be paying for their healthcare, 401k plans or other benefits. One study shows that as many as one in three adults works a “nonstandard”, or temporary, job to get by. Some of these are retired people who need more money to supplement their incomes, or they may like the stimulation and structure of being in the workforce, even if on a part-time basis.
Here’s the gig economy formula: If the company directs their tasks and the work is part of the company’s main business, the business falls within the new law. Employees are covered by minimum-wage and overtime laws. Businesses must also contribute to unemployment insurance and workers’ compensation funds on their employees’ behalf.

Governor Newsom intends to sign the bill but has indicated that he would be open to negotiating changes or exemptions with businesses like Uber and Lyft if they were willing to make other concessions. That has added to the air of uncertainty about the law. Litigation is also likely to follow.

Uber remains confident that its drivers will retain their independent status when the measure goes into effect on Jan. 1. In order to classify drivers as contractors, Uber must prove that it doesn’t direct and control drivers, and that they typically operate an independent driving business outside their work for Uber. Drivers for Uber and Lyft are split on the bill.

Some religious congregations would struggle to pay for full-employment benefits for their leaders if they were converted from independent contractors to employees. “For small churches that operate on very small budgets, it could force them to lay off their rabbi or maybe only hire them part time,” said Nathan Diament, the public policy director for the Orthodox Union Advocacy Center.

The costs for app-based businesses could be significant

Uber held a troubled initial public offering in May and has reported large losses and slowing revenue growth. Dara Khosrowshahi, Uber’s chief executive, has laid off hundreds of employees in recent months to cut costs.

The law levels the playing field

Construction companies have long complained that they face unfair competition from rivals that classify workers as contractors so they can avoid paying payroll taxes and lowball bids on projects. App-based companies are “starting to send carpenters, electricians, plumbers off their platform. These lower-wage employees are undercutting brick-and-mortar businesses who are doing the right thing — paying for workers’ compensation, being very efficient, working hard to make a profit.”

Small vineyard owners are concerned that they could be forced to employ the independent truckers who haul their harvests. They’d have to pay insurance and workers’ compensation. These truckers currently operate as contractors, with their own rigs and insurance, and serve several vineyards.

Creating a Living Trust is an important part of estate planning

Whether a contractor or employee, creating a Living Trust is an important part of life planning. Our Living Trust portfolio includes an Advance Healthcare Directive and a Power of Attorney. California Document Preparers assists our clients throughout the process. Most of our clients are surprised at how easy it is. Schedule an appointment today by contacting us at one of our three Bay Area offices. Our dedicated team is helpful, compassionate and affordable.
Posted by Guideway at 4:52 PM