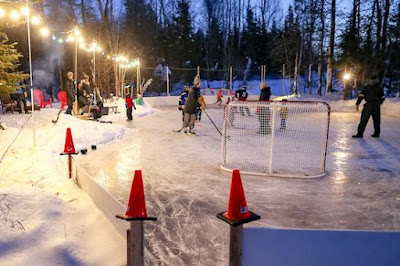 I used to share office space with a bunch of Canadian software developers, and they were nuts about hockey. It got really wild when the Stanley cup playoffs rolled around in the spring. They were contemptuous of Americans who called it “ice hockey”. For them there is only “hockey”. Those who’ve grown up in Canada or those Midwest states that get cold early and stay cold understand hockey’s lure. In a year of Covid, the rinks may have closed down, but dedicated hockey fans have found a way to keep playing.

When indoor rinks closed, these players have turned to “speakeasy hockey”

Christian Klueg welcomed his guests—hockey players ranging in age from teenagers to middle-agers — to his backyard hockey rink. For 27 years, he had built smaller versions. But when he realized that Covid would shutter ice rinks throughout the area, he went all-in on upgrades. He drove 172 miles north to purchase a 1987 Olympia ice-resurfacing machine.

Dependencies include inconsistent thaws and freezes and liability insurance in case injured visitors file lawsuits. Like-minded neighbors have knocked down fences and shared space for rinks; others have complained about the noise created by pucks crashing against wooden boards. “It’s almost like Prohibition-era speakeasy hockey,” Klueg said. “Knock a certain way, come on in.”

Rebecca Racine Keinath and her husband retrofitted their 74-year-old dairy barn. They envisioned playing the game on a higher plane—their hayloft. They laid new planks and a tarp, then flooded it when temperatures dropped in winter.

Dylan Gastel is the 24-year-old inventor of EZ ICE Rinks. He grew up in Rhode Island and worked with his father building outdoor rinks. Eager to get on the ice, Gastel was always looking forward to the next cold front to come through. Once the water froze, he could be found skating until 3 a.m.

Gastel eventually went to Yale, studied mechanical engineering and gained an entrepreneurial grant of $1,000 from a Yale program. He developed the prototype of a rink that could be assembled in an hour and started a backyard rink company in his dorm room. Gastel’s modular kit includes lightweight plastic boards, connecting brackets, a liner and straps that hold the system together. No tools required. In his first year Gastel sold $1 million worth of rinks, and he doubled that in his second year.

Then Covid hit. As school districts and local governments shuttered indoor facilities, Gastel watched his sales spike as families, schools and towns purchased his rinks to offer rink options. September saw accelerated demand, and he projected he would run out of supplies by Christmas. In three months, the company expanded its manufacturing capacity by 500%.

Christian Klueg estimates that he has poured $10,000 into his rinks over the years. His wish list includes refrigeration mats that would keep the ice frozen even when the temperature reaches 50 degrees.

To prevent pucks from landing in neighbors’ yards, one parent added plywood fencing and 10-foot netting. But one winter night he was in his second-floor office and heard a loud crash. His 15-year-old son had shot a puck that ricocheted off the crossbar and crashed through the dining-room window. Other rink owners have been extremely cautious about liability insurance. One parent/rink owner took out a $1 million umbrella policy.

At Guideway, many of our clients are scheduling appointments to create Living Trusts. Covid-19 is still very much a reality, and a Trust, with a Power of Attorney and Advance Healthcare Directive are providing peace of mind to many. Best of all, we guide you through it and we prepare the legal documents. Schedule an appointment with Guideway today.